Oh my days alive. It has been quite the week. We entertained about 26 (half of whom were children) up here in my folk’s house and had another soiree just yesterday and that sir, is why I may have forgotten to post.

Before all that mania my husband and I managed one whole evening by ourselves – after we put our sons to bed obviously, but they don’t count in this instance. I decided to treat ourselves to some roast duck. I had a vested interest as well because I wanted some good quality duck fat to roast my Christmas potatoes in. Anyway it went very well. I have only once before tried to roast an entire duck. It didn’t go very well. The room got marvelously smoky after about an hour with quite a specific scent. Who knew Colombians left the giblets inside in little plastic bags? Luckily Lidl don’t so I avoided that hurdle straight off.

Lastly, there are no two ways about this recipe. It takes forever. Three hours like. But I must admit it was fecking delicious. I had bought a big old beast (about 1kg) thinking we could have some exciting leftovers for a brilliant pasta dish the next day but there was nothing left. My husband and I ate the animal in it’s entirety. We were picking at the carcass with our hands by the end – that was mostly me – but either way there was nothing left but bones.

Squeeze or two of runny honey

Roast the duck for 30mins at 200 Celsius and then turn the oven down to 120 Celsius and cook for a further hour and a quarter.

You will probably need to VERY CAREFULLY empty out the fat from the roasting tray about twice as the duck cooks.

At the end of the hour and a quarter remove the duck from the oven.

Then squeeze about two tablespoons of runny honey onto the top of the duck and use a pastry brush or the back of a spoon to spread it over the whole duck.

Put the beast back into the oven for a final 15mins.

Remove the duck from the oven and cover with foil and leave somewhere warm to rest for about 30mins before serving.

I served mine with a cranberry sauce;

Fry off one shallot in a tablespoon of duck fat. Add in the juice of half an orange and then dollop in a few tablespoons of homemade cranberry sauce from a few weeks ago. Cook it all down for a few minutes. Yum. 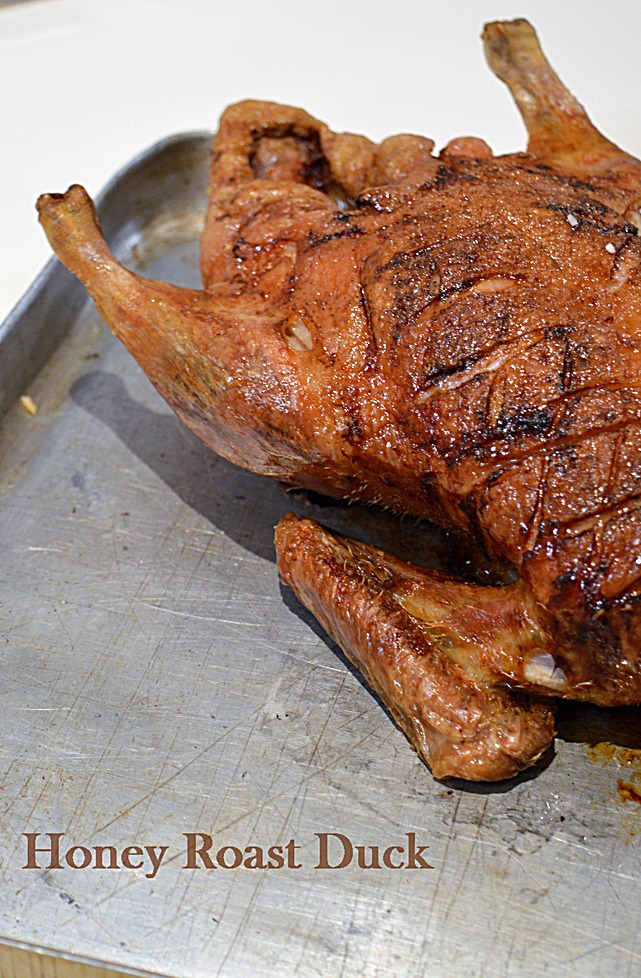