I saw the Hairy Bikers make these a few weeks ago. They’ve been on my mind since. That’s because  I am cool on a whole other plane. Unfortunately I misunderstood their recipe. They clearly say that it makes, quite specifically, 32-36 biscuits. I took this to mean that it made 32-36 individual biscuits i.e 16-18 sandwiched biscuits. That isn’t what they meant. They meant the recipe makes 32-36 finished biscuits. I had decided to go for little ones because they’d be prettier, unfortunately it meant that it ended up taking me forever to pipe the feckers. All 59 of them.

As for life. We’ve redesigned the whole house just before we were about to put the plans in for planning permission. I am so very ready to be in our house.

I’ve decided, again, to get less heavy. Far harder than it might seem. It’s not like my early twenties where I could just tell my body to be less present and it would obligingly make it so. It seems you really do have to stop eating so much cake and pork.

Anyway. These biscuits are definitely not good for you but they look pretty (even if I have taken almost no photos to prove this). I went for three flavours because I was making them for a little girls party so there were purple blackcurrant ones, yellow lemon curd ones and pinky strawberry ones. But it’s only the jam that changes the flavour so go with whatever is in your fridge.

Food colouring of your choice

Then some jam, again, of your choice.

Preheat your oven and line all the baking trays you own with baking parchment.

Put all the ingredients into a big mixing bowl and beat to form a smooth and soft dough.

Get a big piping bag and squish all of the dough inside.

These beasties are normally piped with, what I think, is called a star nozzle but use whatever you have.

If you are going for little ones then pipe out approximately 118 biscuits, cursing all the while.

Put them in the oven and bake for 10-12mins till just browning. You’ll more than likely have to bake them in batches.

While they are baking you can make the buttercream.

Beat the softened butter with an electric whisk for a few minutes till it begins to go a bit paler and silkier.

Add in the icing sugar and SLOWLY begin to whisk it all together, as it becomes less dusty up the speed and beat for a further three minutes.

You can add whatever flavours or colours you fancy. I added in some colour but no flavour. My computer is shouting at me to take out all the ‘u’s in my colours and flavours. Never computer. Never. This is

Anyway. Let the biscuits cool completely before piping a ring of buttercream onto half of your biscuits and filling the centre of the ring with a scoop of lovely jam before finally sandwiching on a second biscuit. 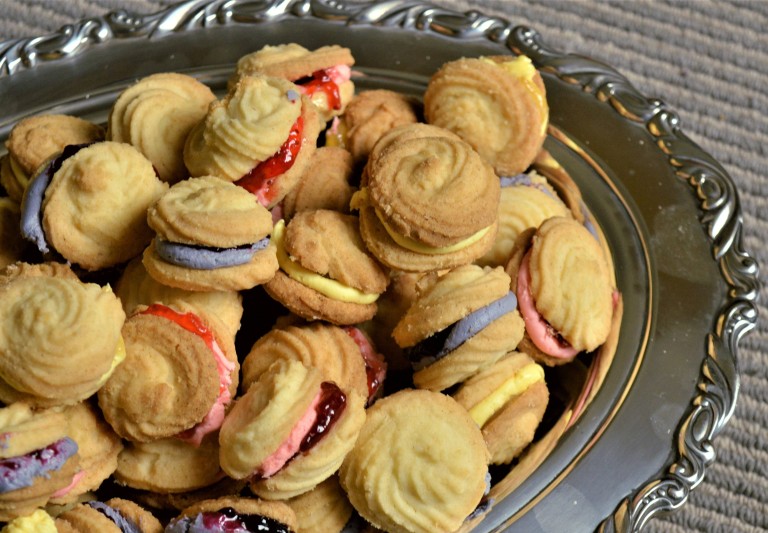