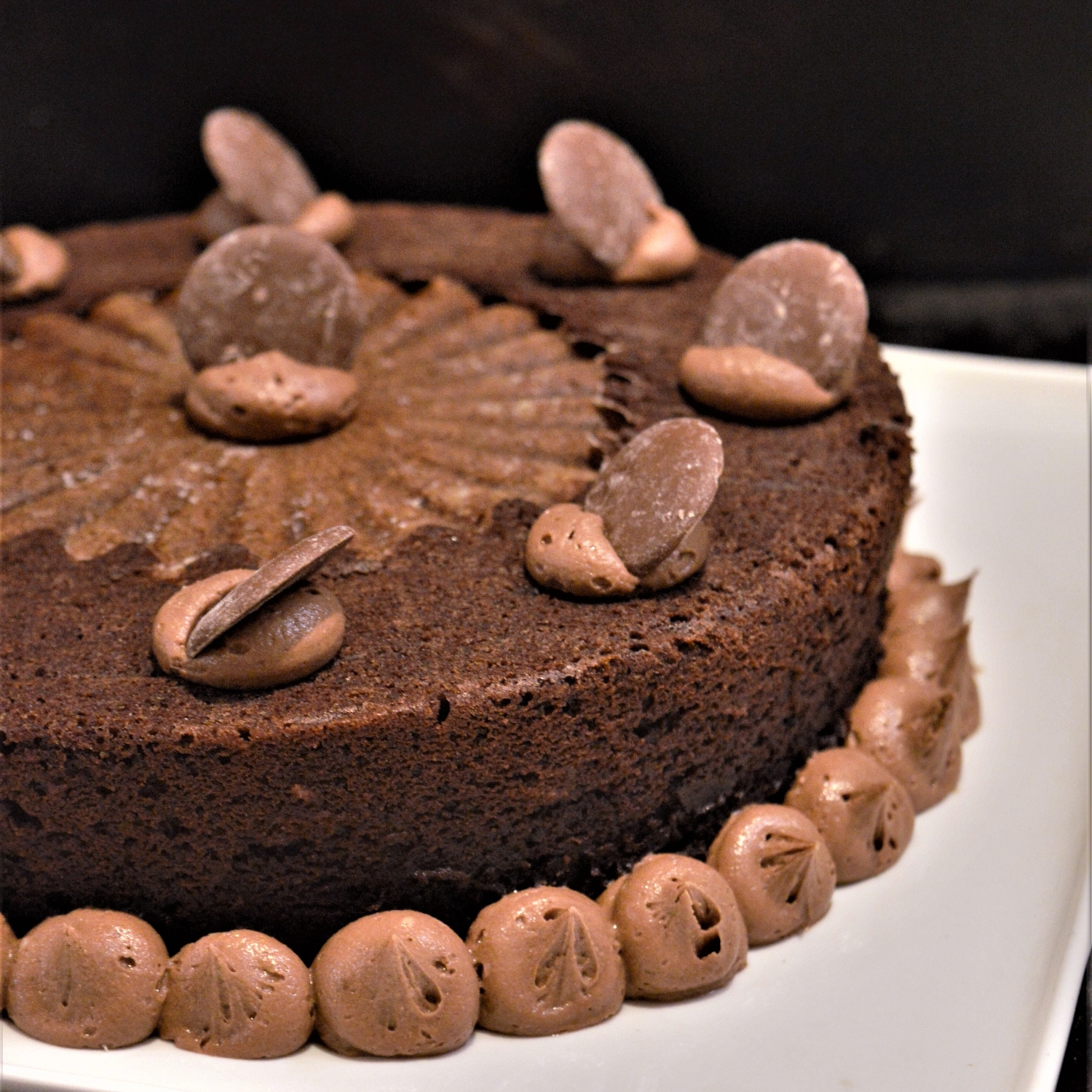 Apologies for the silence on the blog but the days are getting away from me and then there’s been a few that I just haven’t felt arsed to write but It’s Da’s birthday today so I thought that deserved a post.

I had gone to Ikea with sister #5. Despite my very best efforts to avoid unnecessary crud I was sucked into my sister’s errant ways. I ended up with two new baking tins so that’s not too bad. I thought I best use them immediately for the birthday cake.

Da has a few loves. Family and all that aside they include malteasers, chocolate, banana based baking and peanut butter things. I decided upon a modest little caramel banana cake. It was going beautifully. Then I got notions.

I saw the pretty, ribbed, mini tin and thought it’d be perfect inset in a bigger cake. I’d never done anything like that before and that in itself amused me enough to give it a whirl.

So this week it’s a kind of parquet cake; caramel banana cake within a chocolate sponge, stuck together and decorated with Nutella buttercream. Luckily it didn’t go bohemoth on me.

On the general life front there’s not much to report. Still hopelessly waiting for planning news but no joke my house is going to be deadly whatever the decision. I have it all planned. All.

Daithi turned two. I made him a tractor cake that did end up massive and a little closer to a monster truck than a tractor but he recognised it as a tractor so I’ll take that as a win.

I still haven’t made our Christmas cakes yet. Housewife black mark.

Preheat the oven and grease and flour a pretty 15cm cake tin.

Beat the butter, sugar and cinnamon till smooth as you have patience for.

In a separate bowl weigh out the flour and salt.

In a third bowl smush the bananas with a fork and stir in the syrup and yoghurt.

Crack one egg into the butter mix and beat some more.

Second egg and beat some more.

Scrape down the side of the bowl and tip in half the flour mix. Beat.

Half the banana goo. Beat.

Rest of the flour. Beat.

Rest of the banana. Beat and you’re done.

Pour into the prepared cake tin. Only fill the tin up by about 5cm. It’ll rise a bit so use any excess mixture to make buns.

Pop it in the oven and bake for about 45mins, turning half way through. I covered mine with some tin foil after about 30mins because it was browning a bit quickly.

It’s done when it’s nice and springy to the touch and a skewer comes out clean.

Take it out and leave to cool while you make the buttercream.

Beat the butter for a few minutes till it’s smooth and a bit paler than it began.

Add in the sugar and at first SLOWLY beat it and then keep going for a good 3mins.

Dollop in the nutella and beat for another 3mins and that’s also done.

Reduce the oven temperature to 180 Celsius and line a 23cm round tin with a circle of parchment paper and grease its sides.

Un-tin the banana cake and grease the outside of the tin it was in with butter and flour.

This chocolate cake is basically just a bun mix with some cocoa to make it chocolatey.

Put all the ingredients into a bowl and beat till smooth. Done. Nice.

Put the whole lot into the oven and bake for about 20mins till springy.

Let the chocolate cake cool completely before trying to remove the inner tin but leave the outer tin on.

Take your banana cake and spread a fairly generous coating of buttercream around its outside.

Carefully place the buttercreamed banana cake into the awaiting chocolate cake and press firmly to make sure it sticks.

Now find a lovely plate, place it on top of the tin, up-end it and un-tin it. You should now have a lovely parquet cake.

I decorated Da’s with more buttercream and some classy giant chocolate buttons.

I am fairly sure I shall play around with this madness again.