So it’s been a while ay? I forgot how easy it was to get out of a routine and be a lazy fecker when it comes to deadlines and getting things done. I missed my first few posts due to clinical frustration at the agonising planning process and the general chaos of the festive season.

I might mention that I have been baking plenty. My Christmas dessert was more than fifty steps. A Buche de Noel no less. Not to get too cocky but it wasn’t a complete failure. Needless to say it was so faffy I didn’t get around to taking photos.

In other news poor Daithi had his toenail reefed off. It was on holiday. He was playing on the balcony. Opens the door over his big toe and the whole thing goes a curious shade of blue. I reckoned he was fine but the day after Tom stands on it and it pops. Blood everywhere. Manky.

We had to bring him to the capital and a flock of Canary doctors see him and then they use freeze spray and a pliers to partially dismember him. Shudder.

We’re all fine though.

I’ve even decided that no matter what happens with the planning that our house is still remarkably deadly. Doesn’t mean I don’t want the gobshites on the Board to hurry up or that I won’t reap my revenge.

This week’s post is a world apart from my woes or at least a hemisphere apart. My wee Malagasy (pronounced Mal-a-gash) nephew turned one and what says happy first birthday like a chameleon.

I’m not going to talk you through the whole construction of the beast. This is the recipe for the cake itself. It really is a cake, not crazy spongy but not a torte. I used some Nutella buttercream as well to make sure it was entirely unhealthy.

Preheat the oven and line a 20x30cm tin. If you are absent minded here is my post on how to do it.

Melt the chocolate. I just use the microwave. A minute at a time.

In a large bowl beat the butter and sugar till good and smooth.

Add in the egg yolks one at a time, beating well after each addition.

In a nice clean bowl whisk up the egg whites to stiff peaks.

Back to the first bowl and, preferably with the whisk still whisking, pour in the melted chocolate. If you can’t whisk and pour just try to not take forever mixing in the chocolate.

Add in the vanilla and beat some more.

Throw in the almonds and mix it all together till nicely combined.

Dollop in a third of the egg whites and beat it together. Don’t worry about losing the air, this step is just to slacken the chocolatey/almondy mix.

Pour the batter into the prepared tin and into the oven with it.

After 15mins turn the oven down to 160 Celsius and cook for about 35mins (in total) until the middle isn’t wobbly and the top is a bit crusty. It rises a good bit in the oven but will sink down as it cools.

While it’s baking make your ganache. Scarlet for you if you don’t know how to make ganache by now but for those not in the know; weigh out your chocolate and put it in a big bowl. I like to use a glass one.

Heat the cream till just boiling and pour it over the chocolate. Le tit sit for a minute before whisking it. It’ll look a bit split first but then becomes perfect smooth and glossy.

Assemble however you fancy. It carves surprisingly well so go nuts. Here it is pretending to be a gecko. 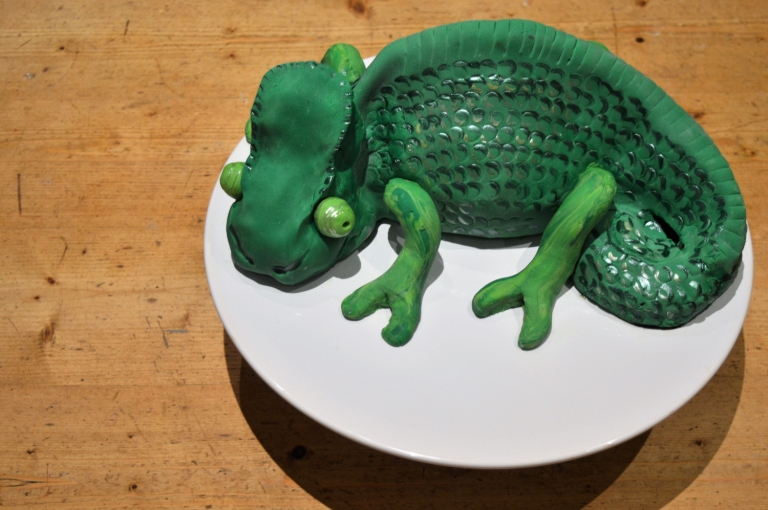